Why was I absent from the publishing scene for so long?

Did I lapse into senescence and a vegetative state?

I certainly didn't take a writing hiatus. Since the publication of my last novel, Night Falls on Damascus, in 2007, I've completed two novels, many stories, poems, and started exploring a digital canvas for my work.

At the time Night Falls was published I was still under contract to St. Martin's Press, that is, this publisher had first dibs on my next novel. I did submit a sequel to that mystery novel, contemplating a series starring my Lebanese detective, Nikolai Faroun.

Then came the "Great Recession."

St. Martin's Press, along with the other big New York based publishing houses (known as the Big 5), already confounded by the rise of e-books and the Amazon phenomenon and now terrified at the prospect of traditional book publishing bottoming out, panicked.

They panicked and committed what I call the "MID-LIST MASSACRE OF 2008." The Big Five summarily "fired" scores of "Mid-List Writers"-- meaning published and contracted authors who could not justify their existence under Big Publishing's wings, not because their books weren't selling, but because they weren't selling enough. As a Mid-Lister, I was thrown under the under the bus with all the others, and my sequel was not picked up.

Sent me into a Blue Funk, and I held a right jolly Pity Party for myself (I was the only one in attendance.) For a couple of years, I stopped submitting my work. Not that the Pity Party lasted that long but other factors weighed in.

When I started submitting again, I was living overseas and gradually discovered that, even in the age of the Internet, pitching books to US publishers (the big book buying market on the planet) is problematic. After a decade living abroad, I headed back to the States.

Even after I returned to the US in 2017, it took me a few months to gear up and start to get out my work. I had to reeducate myself about the marketplace, much changed since I was last published. For one thing, I re-envisioned my writing goals, shifting from novel writing to stories, poems, and mixed media works. Given the Small Press Renaissance, much of it on-line, a writer can find, with careful research, receptive and proven markets.

Now, in 2019, I have my "groove back," feel energized, with all sorts of creative projects percolating. It is heartening to see my stories find a place at the table of the Great Moveable Feast, whether on-line or in print.

For other writers, here's the lesson: "Dispel the Blue Funk with the application of Black Ink." 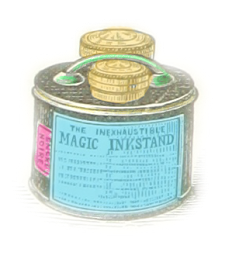 BACK TO ARTICLE: "STAYING CREATIVE INTO THE GOLDEN YEARS"