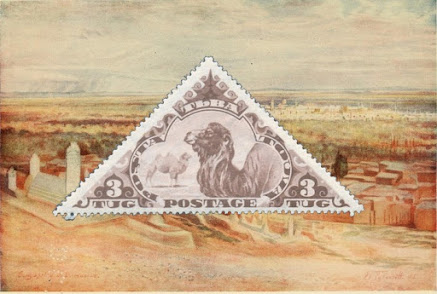 The Touvan People’s Republic (briefly known as Tannu Tuva from 1921-26) is indeed a real place and was formerly an independent sovereign state within Soviet Russia. Since 1992, the area has been a part of the Russian Federation, but called the Tyva Republic.

Tannu Tuva issued a lively series of stamps during the 1920s and 30s depicting Tuvan animals, such as this Bactrian camel, and scenes from Tuvan life, often in unusual shapes, diamonds and triangles. Popular with young Western stamp collectors, stuffy old philatelists considered Tuvan stamps to be little better than store coupons. The stamps now have some achieved some respectability and even an affectionate place in the hearts of collectors.

One such collector, Richard Feynman, the Nobel Prize winning physicist, planned to visit fabled Tuva in the 1990s but never made it. Following his death, his daughter completed the trek to honor her father’s memory. The story of Feynman’s adventure and love of Tannu Tuva and its stamps is chronicled in a book by Ralph Leighton in an affectionate memoir, Tuva or Bust.

Answer to What in the World #4 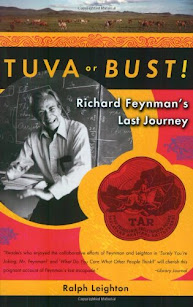 This Tuvan 8 kopeck stamp from 1927 shows the boundaries of the former independent state, sandwiched between the USSR to the north and Mongolia to the south. They were all the only countries to recognize Tuvan sovereignty until the country was fully absorbed into Soviet Union in 1944.    (Scott 20)

Nobel prize winning physicist  Richard Feynman was fascinated  with Tannu Tuva, a tale chronicled in this memoir by Ralph Leighton.