While showing the artistic influence of Minoan Crete, the Lady of Tiryns hails from mainland Greece and ancient Mycenaean culture (d). The map shows the location of Tiryns in ancient Arcadia, a region of the Greek Peloponnese

Mycenaean culture flourished on mainland Greece from 1400 to 1200 BC. After this period, Mycenaean civilization went into decline and was perhaps overrun by a Dorian invaders from the north of Greece. Beyond this conjecture, the reasons for Mycenae's decline remain an historical mystery. A reconstruction of the great palace at Mycenae, known as the Megaron, is shown at the height of Mycenaean power. (Figure 1)

Who was the Lady of Tiryns? She too remains a mystery. Her image is actually based on an archaeologist's composite drawing. (Figure 2). Her formal pose, elaborate coiffure, and the ritual vessel in her hand all indicate that she was a participant in a religious procession, like the one depicted in Figure 3.

She remains one of the most captivating figures of antiquity and one rightly celebrated on this Greek stamp from a 1937 set honoring various persons and events from Greek history. 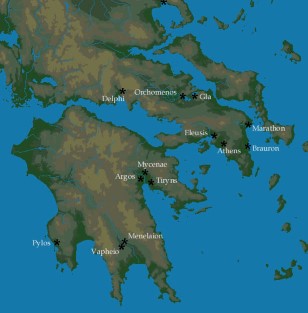 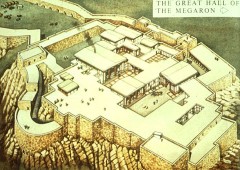 Back to the What in the World Index Page 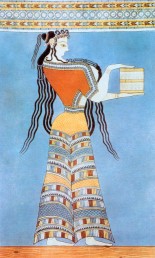