ANSWER:  The image of the late and largely unlamented King Farouk of Egypt has been obliterated by this overprint.

The main purpose of an obliteration is to deface the image of a ruler who has fallen out of favor. In Egypt this is a very ancient practice indeed and dates to dynastic days when the cartouches of unloved pharaohs were expunged from their stone monuments.

Since the denomination of the stamp has not been changed this could not be a surcharge, nor is the marking a form of cancellation. A tag is a phosphor marking on a stamp used as a precaution against counterfeiting.

As an historical note, Farouk, the last king of Egypt, was ousted in a coup engineered by a young army officer named Gamal Abdal Nasser.  Nasser, as leader of a revitalized and socialist Egypt, would rise to pre-eminence as the spokesman for the pan-Arab movement from 1953 to his death in 1970. 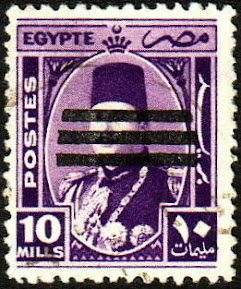