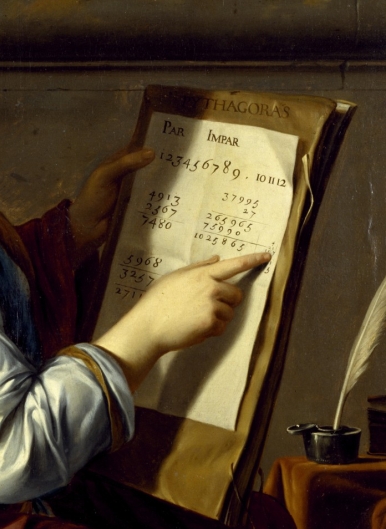 Our final clue is more speculative but leads us to consider the contents of the numerical table itself. While the numbers shown on La Hyre's tablet demonstrate addition, subtraction and multiplication, division is missing.

Was the omission of division a mere oversight or deliberate, one that hints at the divisiveness within the Pythagorean brotherhood caused by the discovery of irrational numbers?

We have no hard evidence that La Hyre was aware of the controversy-- one that led, ultimately, to betrayal, murder and the dissolution of Pythagoras' famous school. However, when put together with the La Hyre's "headlining" of the philosopher, the suggestive elements in the painter's allegory, and the secretiveness of the Pythagorean brotherhood itself, the omission, or concealment, of division is intriguing.

We find addition, subtraction, and multiplication illustrated on La Hyre's allegory but, oddly, division is missing-- or concealed.

Those interested in learning more about Pythagoras are referred to the following resources:

1. The Stanford Encyclopedia of Philosophy has an excllent overview of Pythagoras:

2. An interesting podcast by Earl Fontainelle, a presenter for The Secret History of Western Esotericism Podcast, can be found here:

RETURN TO THE WELCOME PAGE