There is something essentially humorous in the struggle of carefully-coiffed three hundred-pound men in loincloths grappling with each other in a ring that can barely accommodate them.  Perhaps it is this sense of disproportion we find so appealing, as if we were witnessing a titanic combat waged between two genteel goliaths inside a bottle.  (Figure 1)

The Japanese word for a sumo wrestler, rikishi, means in fact, “gentleman of strength” and it reminds us that the proceedings conducted inside a sumo ring, unlike the macho fopperies sponsored by the World Wrestling Federation, are conducted in the light of a two thousand year old tradition which once delighted the eyes of emperors and court royalty. The brief span of a sumo match, measured in seconds, is carried out with such punctiliousness—even the breathing of the rikishi is coordinated during the shikiri or warming up period—that we are reminded that if this be comedy, then it is laughter on a grand scale, with the gods looking on. 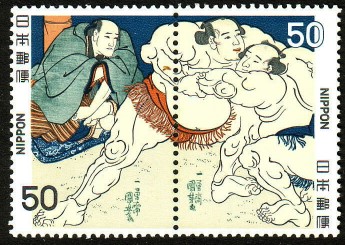