Interestingly, the appearance of the first Japanese postage stamps in 1871 coincides with the rise of Kanjin Osumo (“Grand Sumo”) as a national passion. These changes were in keeping with the spirit of the times, for the Emperor Meiji had just begun the great reforms known as the Meiji Restoration. The Restoration transformed a Japan still organized along feudal lines into a great modern nation state, the rival, and often the envy, of Western powers. The record of that transformation has been wonderfully preserved in Japan’s postage stamps. They have also helped to celebrate Japan’s traditional heritage. The sumo set of 1978 is typical of the color, verve, and dash of Japanese topicals, as stamps on a particular theme are called.

Are we likely to see the glowering image of Hawaiian-born yokazuna, Akebono, on a Japanese stamp anytime soon? Very unlikely, since the Japanese postal ministry, like the United States Postal Service, rarely honors a living notable. Meanwhile, we can appreciate the glories of legendary rikishi through these postal windows on the past. (Figure 8) 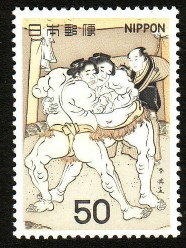