Only Yokuzuna are permitted to wear the woven belt of the same name when they enter the ring. The Grand Champion Hidenoyama, who became yokuzuna in 1845, can be seen wearing one in Figure 7. The belts come in different styles, are handmade and tailored by fellow rikishi, and can weigh as much as 30 pounds. Traditional hairstyles are also illustrated in the stamps. In Figure 6 (previous page), the seikotori Onogawa can be seen wearing the gingko leaf topknot (oichomage) appropriate to his rank while his opponent has the top of his head shaved to identify his samurai heritage. 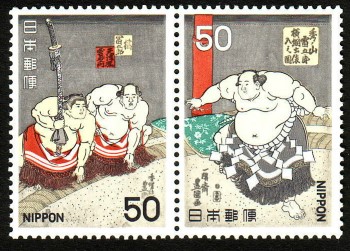 by Kunisada I  18th century