There are no restrictions as to weight and height in sumo; nevertheless it does help to have a genetic edge if one aspires to be a sumotori. A case in point is the legendary wrestler who appears on the stamp in Figure 4. Born in 1788, Daidozan or “Great Child Mountain” was a prodigious 33 ½ inches tall when he was the age of one, and according to contemporary records, at the age of 7 was nearly as round as he was tall (4 feet) and weighed 180 pounds. He began wrestling at the age of 16, attained the rank of seikotori (professional), but for some unrecorded reason was a has-been by the time he was 18. One can almost see him ripple and bounce as he performs the dohyo-ri in the Ukiyo-e print. A quality that makes these stamps so appealing is the artists’ delight in sumo’s droll choreography.

The exaggerated style of these wood block prints is typical of the Japanese art form known as Ukiyo-e or “Images of the Floating World.” The Yoshiwara district of Edo (Tokyo) during the Shogunate earned this title as the playground for the lusty appetites of the samurai who spent their R&R in the district’s taverns, teahouses, brothels, and theaters. Renowned artists such as Hiroshige and Utamaro lent their talents to enriching this popular art form. (Figure 5) Among them was the mysterious Sharaku, an artist who appeared in Yoshiwara in 1794 and disappeared the following year, leaving behind over a hundred prints, but no hint as to his personal history. The portrait of Daidozen, discussed above, is a good example of his flamboyant and satirical gift for caricature. 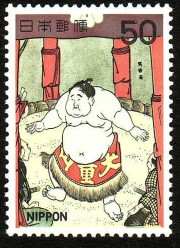 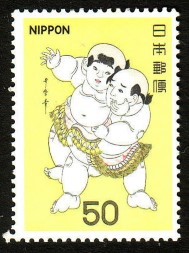