Since elements of Shinto, Japan’s indigenous religion, grace the intricate dance that is a sumo contest, a honbasho is more than a sporting event. The ring-entry ceremonies or dohyo-iri set the tone of the bout. The contestants, according to rank, make their way to the ring accompanied by a referee, and perform a series of prescribed arm and hand movements. The precise movements differ from rank to rank, with the more elaborate ritual performed by grand champions or yokuzuna. The clapping of the hands, for example, summons the ancestral gods. The stomping of the feet by a yokuzuna is to drive away evil spirits. Similarly, the ritual elements of shikiri or the pre-bout ritual have their roots in religion. Prior to coming to grips with an opponent, a wrestler will cleanse his mouth with power water (chikara mizu), wipe his mouth with power paper (chikara gami) and cast salt before him to ward off demons.

In a way, the bout itself may seem anticlimactic to the preparation that precedes it, especially given the brevity of the contest. Actually, the bout falls into two distinct episodes. The first part is known as the nirimiai, or the staring down contest, in which the two opponents, poised in combative crouch, gain the measure of the other, a psychological test of will which can often determine the outcome of the bout itself. (Figure 3) When the initial clash or taichiai comes, the struggle may seem to the casual observer like a mere matter of leverage, with the heavier contestant simply forcing his contestant out of the ring or onto his knees. Though weight often carries the day, there are seventy officially recognized wrestling techniques, known as kamarite, so it is not unusual for a mere 250 pound pip-squeak to surprise a 400 pound behemoth with a combination of speed, agility, and skill. Still a sumotori shouldn’t be diffident about his diet. It is not unusual for a wrestler to consume twenty bowls of rice a day along with generous helpings of chankonabe or sumo stew. 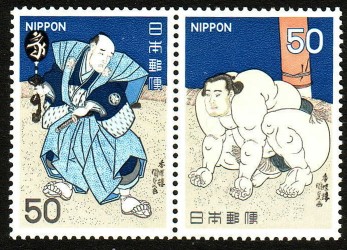