Nan Madol is justly famous for its fabled ruins but the island of Kosrae has its own smaller and, according to the Kosraens, original, city of stone, called in Kosraen, En Sara. Powerful Kosraen magicians raised the basalt crystal logs to heights of fifty feet. Caught up in a war with Ponapean magicians, the sorcerers of Kosrae defeated them and went on to create the more famous wonder known as Nan Madol. Thus did the Kosraen overlords teach a lesson in the arcane arts to the presumptuous, upstart sorcerers of Ponape.

Old Sam Gunn, the resident storyteller in Tafunsak village, told me this history in 1968 when I was Peace Corps agriculturalist on Kosrae, the southernmost island in the Ponapean chain. My name at the time, given to me by the Tafunsak villagers with whom I lived, was Oran or “He who cuts down coconut trees.”

En Sara is located in the middle of Lelu Island, the port town of Kosrae. Oran remembers it as a forbidding, solemn place, dense with drooping palms and tangled undergrowth. The former residents whispered there, resenting intrusion, keeping their secrets close. Few Kosraens ventured there even during the day. 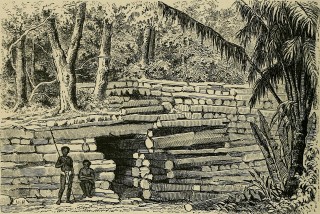 “In ancient times, the magicians wove with stone.”