Patron of artists and scholars, Lu Dongbin was another T’ang Dynasty figure and is the official leader of the Eight Immortals. According to legend he was converted to the way of the Tao after a drunken dream (the famous “Rice-Wine Dream”) in which he foresaw his own career with its triumph, sorrow, and loss. Rejecting the vanity of ambition, he became a master of Taoist alchemy. He is often shown with a fly whisk, symbolizing his ability to transcend earthly limits, and a magical sword that confers invisibility and vanquishes evil spirits. 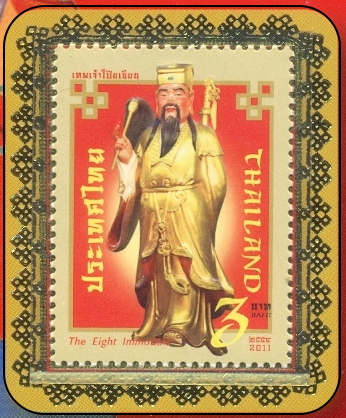