Patron of gardeners and the poor, Lan Caihe is sometimes portrayed as male, sometimes female or, as a hermaphrodite, a blend of male and female natures. This Chinese saint is usually depicted carrying a basket of flowers and herbs used to Taoist ritual, as shown on this stamp, but is sometimes shown as playing a flute. Lan is the trickster figure among the immortals, sometimes a strolling minstrel, sometimes a hawker of snake oil, sometimes a satirical poet whose work belittles the pursuit of wealth and material advantage, warning of the brevity of life. Indifferent to the elements, Lan will sleep half naked in the snow, kept warm by spiritual essence. That essence is often fortified by strong wine and, according to legend, Lan ascended to the celestial spheres on a crane during a tavern drinking spree, leaving behind clothes and castanets. 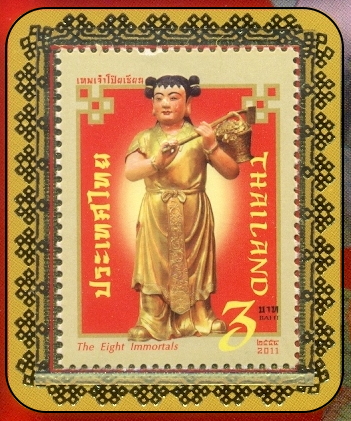