Each stamp, designed by Mr. Udorn Niyomthum, appears to be based on a painted ceramic or porcelain model which gives each character added color and dimensionality.

The likely answer is that the number 8 is considered lucky by the Chinese, and the Eight Immortals, each one a patron of a particular art or profession, are said to confer good fortune wherever they go. For this reason, they are depicted in painting and sculpture as a group, traveling through the celestial realm and even venturing out to sea.

Three of the characters were actual historical personages but the other five are legendary figures and all of them embody Taoist concepts and principles.

Each of the Immortals has his or her own story or body of legend. Tales have been added over the centuries, probably beginning as far back as the Sung Dynasty (AD 960-1280).

This article describes the first four of the eight characters, in the order listed on the souvenir page published by Thai Post.

The Immortals are known under various names. I have used the Thai Post transliterations and listed in brackets the more well-known name for the deity. 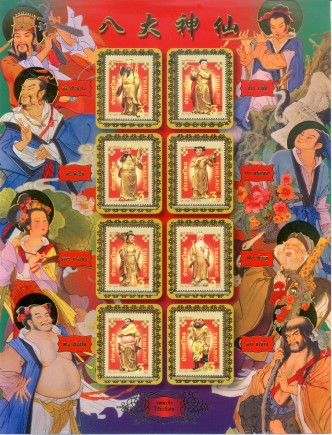