The sole female deity among the Immortal Eight, He Ziangu is shown carrying a lotus, symbol of immortality. A woman of great beauty and saintliness, she is the patron of the home and homemaking. Having trained herself from an early age to eat only spiritual food (“mother of pearl” according to tradition) she is lighter than air and can easily fly about the mountains gathering flowers and fruit for her mother. She is one of the Immortals with an historical timeline, having been identified by some chroniclers as the daughter of a shopkeeper during the reign of Empress Wu (AD 684-705) during the T’ang Dynasty. 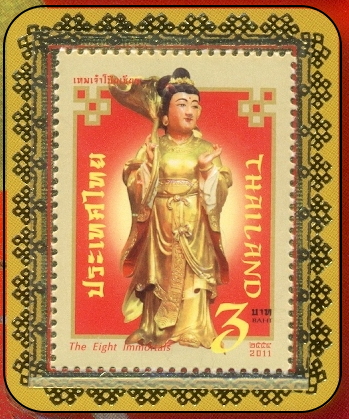