Bare-chested, big-bellied, a man of many names, Han Zhongli was an actual historical figure who was named Marshal of the Chinese Empire during the T’ang Dynasty (AD 618- 907). Benefactor of the poor, he has long been associated with the quest for immortality. For this reason he is often depicted holding the Peach of Immortality or (as here) a magical fan which has the power to resurrect the dead.

According to one story, Han Zhongli discovered the elixir of immortality after a period of prolonged meditation. He was then carried off to the immortal realms on the back of a celestial stork. 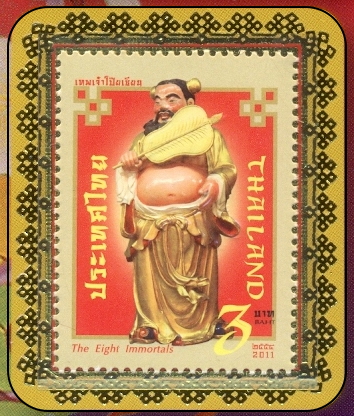