She is often pictured next to her renowned father, Asclepius, and her name follows his, just before that of her sister Panacea, in the original Hippocratic Oath. In temples of healing throughout ancient Greece, her role was to purify and prepare those in need of her father's cures. In painting and sculpture, she is often shown feeding a snake from a golden bowl, the serpent wrapped about an oak sapling.

This is how we see the Classical goddess Hygeia (or "Health") portrayed in a series of charity stamps issued by Greece in 1934 (RA49- RA51) and in 1935 (RA53-54), two of which are shown on this page. These two sets, nearly identical except for the appearance of the country name HELLAS in the 1935 issue, were created to benefit tubercular employees in the Post, Telephone, and Telegraph Service. They were required on all regular mail, parcels, and telegrams during specified times of the year (at first during the Christmas season and later during the Easter holidays). The three T's at the bottom left of each stamp identify their charitable purpose, the 10 lepta stamp being required for all regular mail and printed matter, the 20 lepta on each parcel post and money order form, and the 50 lepta on all telegrams.

The choice of the goddess Hygeia as the image for these stamps is an interesting one. Her name is the source for the word "hygiene", but outside of this little is commonly known about her. Honored by the ancient Greeks as a great healer in her own right, hers is a legend with a mysterious twist to it.

The Healer's Daughter: A 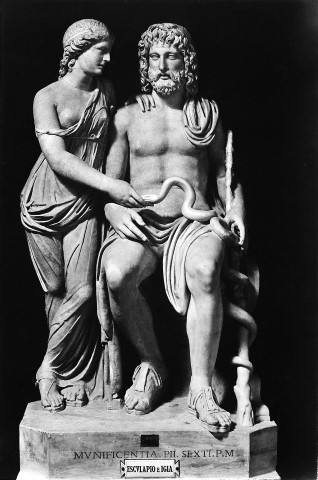 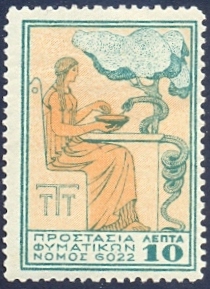 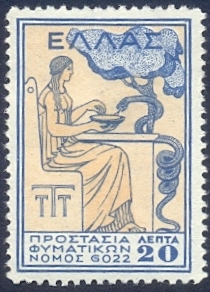