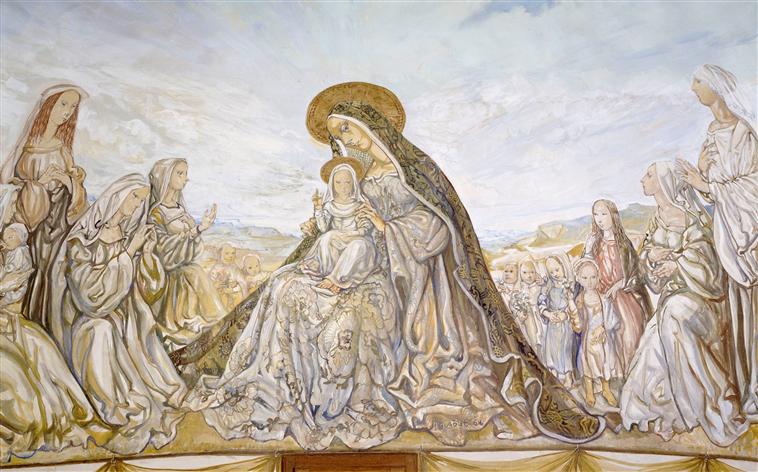 This brings us to the curious Madonna depicted on the Dahomey stamp, curious in that it appears Foujita radically altered his vision of this “Vierge a l’Enfant.” The image on the stamp has been cropped to focus on mother and child, a section of a large painting Foujita prepared toward the end of his life to adorn his personal chapel in Reims, France (Figure 5). This full-scale work depicts the Virgin and child surrounded by a crowd of worshippers, all women and children. The outdoor setting is reminiscent of Da Vinci’s imaginary backgrounds.

The Madonna and child went through several transmutations it seems. In an artist’s study (Figure 6) the image of the Madonna, a reworked head apparently taped over an earlier version, is tender and seemingly deferential to the Christ child. The final image shows a Madonna remote and preoccupied, her attention fixed not on her child but on the some object of contemplation, perhaps even bemusement as she considers whether her child is ready for this world, its adoration and its suffering.

There are differences in the child too. The delighted child of the artist’s study holds a blank parchment or canvas. On the stamp, a more austere, unsmiling child gazes straight at us, and the canvas has disappeared. The child’s features have been subtly altered, for the image on the stamp is more distinctively Asian in appearance. Questions abound— why did Foujita decide to revise his original composition? One can’t help but wonder if the Madonna’s skepticism mirrors the artist’s, a shift from tenderness to the enigmatic. Perhaps an answer was on the Christ child’s script but this has now vanished. Perhaps the child is the artist himself, an Asian “outsider” reborn into the Catholic faith. If so, there is a touch of triumph in the portrait. We are left with a pontiff more than a child, the crowd of worshippers perhaps more ardent in their devotions because of it.

The Curious Case of the Foujita Madonna -3 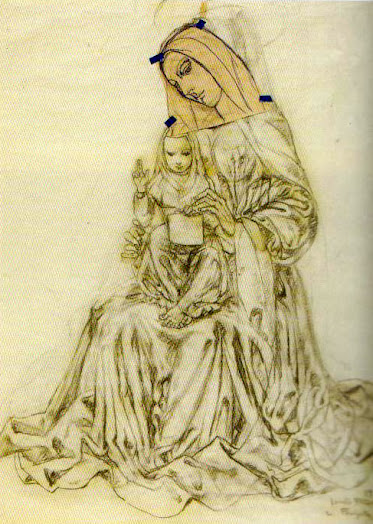 Figure 6: Foujita's study for the work that would grace his personal chapel in Reims, shows a "tender" Madonna and an amused Christ child holding what might be a parchment or a canvas.

Figure 5: The main portion of the finished "Vierge et l'Enfant" as it appears on a wall of Foujita's personal chapel. This is a bemused Madonna and a pontifical, almost stern, child.

The parchment along with child's smile has gone. But the eyes closely resemble the eyes of Foujita in his self-portrait (Figure 2)