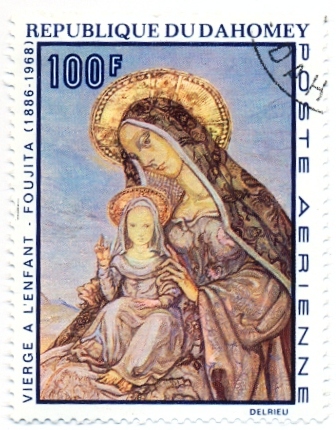 All art is mysterious, partly because the appeal of art is intensely personal, and partly because artists explore the greater mystery that we are to ourselves.

This Madonna and child honored on a postage stamp from the former African republic of Dahomey (Figure 1), now the republic of Benin in West Africa, presents us with a confluence of mysteries.

One has to do with the artist himself, Tsuguharu Foujita, a Japanese artist still considered with some reverence in France, if nowhere else. Secondly, Foujita’s painting hints at an inner illumination that came to the artist late in life. The third mystery has to do with the issuing of this stamp by the former African state. Why would Dahomey due homage to a “Foujita” Madonna?

The artist Tsuguharu Foujita enjoyed an extraordinary career. Born in 1886 in Tokyo, Japan, he traveled to France as young man in 1913, struck up friendships with Picasso, Jean Cocteau and Amedeo Modigliani. Following World War I, Foujita’s fame in France was enhanced by intense European fascination with Japanese art.

The Curious Case of the Foujita Madonna Figure 2: A Foujita self portrait dating from the 1920s. Foujita was a great friend of the artist Modigiliani and it shows here.

Figure 1: Madonna and Child by Foujita from a set of  airmail stamps issued by the former West African state of Dahomey.