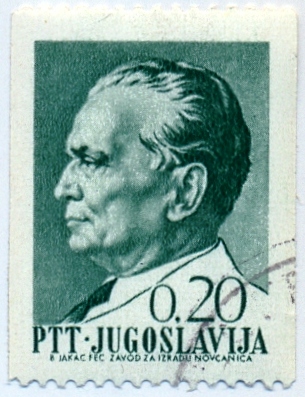 A THUMBS UP would seem to be an acceptable choice for Fearless leader JOSIP BROZ TITO . . .

Born Josip Broz in 1892 in Croatia in what was then the Austro-Hungarian Empire, TITO, as he came to be known, embraced a military career at an early age and rose to become the virtual dictator of the second Yugoslavia in 1945-46 after years of leading the partisan resistance against the Nazis in World War II.

He is perhaps best remembered for his fierce pursuit of independence for his new union of Croats, Serbs, Bosnians, and Slovenes and for his early leadership, along with Egypt’s Gamal Abdel Nasser and India’s Jawaharlal Nehru, of the Nonaligned Movement of nations during the diplomatic Cold War of the 1950s and 60s.

Tito resisted pressure from Russia to become a puppet state, one of the few communist leaders who had the nerve to stand up to Josef Stalin. One story has it that Stalin tried to have Tito assassinated. Tito warned the Russian dictator:

“Stop sending people to kill me. We've already captured ﬁve of them, one of them with a bomb and another with a riﬂe. . . . If you don't stop sending killers, I'll send one to Moscow, and I won't have to send a second.”*

Tito is credited with holding together a delicate coalition of disparate Slavic groups and introducing economic, religious, and constitutional reforms that invigorated his country and demonstrated that communism did not have to assume the grey monolithic structure of Russia and China. His astute political balancing act lasted from 1946 until his death in 1980.

*- quoted from the Wikipedia article on Tito.