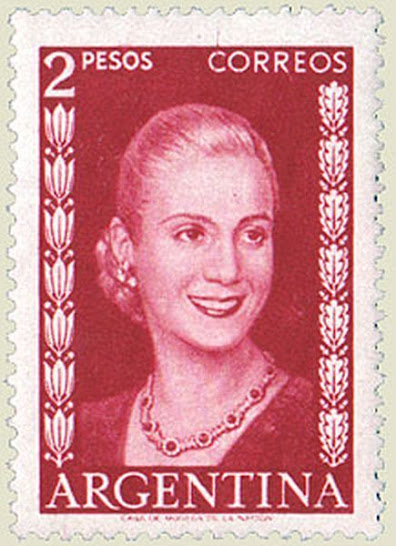 In Latin America, and especially in Argentina, EVA PERON has nearly assumed the mantle of sainthood. On top of that, she has become a potent cultural icon, akin to another Latin hero, Che Guevara, her fairytale story of rags to riches made world famous by Andrew Lloyd Webber’s musical and the subsequent film, EVITA. This fame and celebrityism makes it difficult to assess the historical legacy of Eva Peron. The former first lady of Argentina (1946-1952) certainly has detractors, but negative press about her has often been poisoned by her political enemies.

Eva Marie Duarte* was born in 1922 near Buenos Aries, her father a wealthy rancher who abandoned her mother and left the family in poverty. In 1930s Buenos Ares, Eva made an initially precarious living as a singer, model and actress but by the 1940s had achieved some measure of fame. In 1944, she attracted the attention of Colonel Juan Peron, an army officer who was to become the president of Argentina 1946.

The myth of EVITA begins with this famous union for Eva was not only admired for her beauty and charm but for the numerous good works that became associated with her name. In particular she adopted the cause of the descamisados, the urban poor who became her ardent supporters and idolaters.

Although her name has been somewhat tarnished by her staunch support of her fascist** husband, this has been overshadowed by her efforts to achieve social justice (including voting rights for women in Argentina) and the tragic circumstances of her early death, at the age of 33, of cervical cancer.

Her tomb, even today, is the site of pilgrimage by people the world over.

*- Her birth name is in dispute.

**- Juan Peron was an admirer and colleague of Spain’s fascist dictator Francisco Franco, but Peron’s rule was by most accounts more restrained. Political parties, for example, were allowed to flourish during Peron’s presidency.