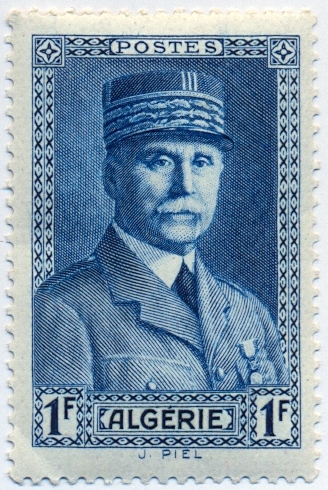 History has not been kind to PHILIPPE PETAIN, so a THUMBS DOWN is the likely choice.

Petain’s legacy is a disheartening tale. A distinguished French general of World War I, Marshal Petain was best known for his heroic defense of Verdun in 1916 and for his compassionate attempts to improve the morale and living conditions of the French fighting men in the trenches of that horrendous conflict.

Following WWI, he did his utmost to place France on a strong defensive footing so that she would never again be subject to German aggression. For this reason he championed the ill-conceived Maginot Line, a vast line of fortifications on the French German border designed to be impregnable.

When the Nazi blitzkrieg of 1940 simply bypassed the Maginot and descended on France from Belgium (as the Germans had in WWI), Marshal Petain saw his country, its government, and its army disintegrate. Trying to salvage what he could of the national identity, he collaborated (along with Pierre Laval) with the Nazis and set up a Nazi-supervised French government in southern France with its headquarters in Vichy. “Vichy France” as it came to be known, was despised not only for collaboration with the conquerors but for its role in rounding up Jews for transport to Holocaust concentration camps.

Following the German defeat, Petain was put on trial in France, sentenced to death, but eventually condemned to solitary confinement. He died alone and reviled in 1951.

The reader may be curious about Petain’s appearance on an Algerian postage stamp. The stamp dates from 1941, when Algeria, a French colony, was governed from Vichy.