The issuing of this set of  commemorative  stamps   in 1917 seems a belated attempt to honor and perhaps rehabilitate  Ferdinand's and Sophia's status   by Ferdinand's nephew, Karl, the successor to Franz Joseph (1916) and the last Austrian emperor. But everything came too late for the Hapsburgs. By the end of the next year, the war would be over, and the Austro-Hungarian Empire would be no more.

The "K.u.K. Militarpost" identification  which appears within the top frame of each stamp stands for "Kaiserlich und Koniglich" --  "Imperial and Royal"-- and was the primary title for the Hapsburg ruler, who was jointly Austrian head of state and the King of Hungary. "Militarpost" reflects the fact that this was a war issue and Bosnia was under military administration.

These stamps also remind us how ethnic and religious hatred in the modern age can have unforeseen and calamitous consequences. When it was all over, World War I claimed some fifty million victims.

The stage was set for another global conflict. 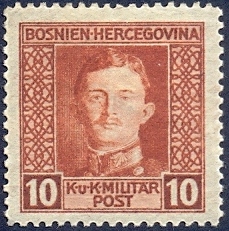 Following the death of Emperor Franz Joseph in 1916, young Prince Karl assumed the reins of power, but not for long.

With the war over in 1918, Karl resigned from political duties, although never abdicated. After unsuccessful attempts to restore the monarchy, he was finally exiled to the island of Madeira.

Karl died in 1922. For his piety and attempts to broker a peace agreement during the war, he was canonized by the Roman Catholic church in 2004.

BACK TO THE PORTFOLIO PAGE