The set of Bosnian stamps (Scott B13- 15) figuring in our mystery is one of the most poignant and thought-provoking  in postal history. It was issued in 1917 for the purpose of raising revenue for a Sarajevo cathedral to commemorate the  Austro-Hungarian ARCHDUKE FRANZ FERDINAND and the DUCHESS SOPHIA, both assassinated by the Serbian nationalist GAVRILO PRINCIP on June 28, 1914. This fateful act of terrorism provoked  Austria-Hungary to declare war on Serbia, instigating a chain reaction that put all of the Europe's armies on the march. Not only do these stamps bring us back to  the origins of the catastrophe known as World War I, they remind us of the legacy of ethnic hatred that continues to divide the people of the former Yugoslavia, most of which was a part of the Austro-Hungarian Empire when these stamps were issued.

Somber in tone and color, violet black, claret, and deep blue, the 40 heller shows the slain couple side by side, the 10 heller shows the completed cathedral, and the 15 heller a portrait of the archduke.  There is irony, as well as tragedy,  in the political murder of Francis Ferdinand, for he was liberal by Hapsburg standards and represented the best hope of salvaging the Austro-Hungarian Empire from the decay and decrepitude that had set in with the advancing years of his great-uncle, Emperor Franz Joseph , the longest reigning sovereign in Europe. But Ferdinand had become a symbol of reforms that were too late in coming and that were resented by the very ethnic nationalists he had hoped to appease. Perhaps the most unloved couple in the dual monarchy, the archduke and duchess were shunned by the emperor and the court because Sophia was of only minor nobility. Though they were devoted to each other, court protocol kept them apart even in death, for Sophia was not accorded the same funeral and burial rites as her husband. 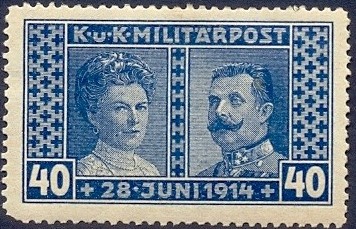 THE STAMPS IN DEVIL AT THE DOOR