THE STAMPS OF "BUZZ AND GINGER"  (cont'd)

Numerous Soviet Russian stamps extol the USSR’s space achievements, beginning with Yuri Gargarin’s epic circumnavigation of the planet in 1961. Gagarin’s achievement spurred the US rival space effort, culminating in 1969 with Apollo 11, the first manned spaceflight to touch down on the moon. Although there has always been the threat of space turning into a superpower battleground, this fear has been accompanied by the hope that space exploration would lead to cooperation rather than conflict, a hope depicted on the 1976 Russian stamp below showing the Soyuz-Apollo mission, the first US-USSR joint space flight, the Russian Interkosmos 14 manned space mission, part of program to carry non-Russian cosmonauts into space, and the French Aureole satellite. 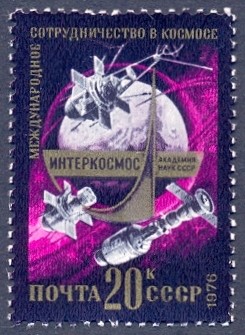 To the Portfolio Portal