An hour later they sat in the revolving restaurant atop Station Lycra, watching the stars come out one by one, for it was a characteristic of the Barnardian system that the stars appeared at lunch and then again for tea.

"You know Ginger," said Buzz, feeling warm and expansive with three Simburgers under his belt. "The panoply of the heavens has got me thinking. The universe really is infinite after all."

"Oh, how's that Buzz?" Ginger took a long pull on her Cosmic Shake.

"Well, imagine that space is finite."

"If space is finite then it means it has a border, an end, a limit, a frontier."

Ginger nodded sweetly as she bit into her sandwich.

"Well if the known universe has a frontier, then what's on the other side of the border? More space, that's what. Ad infinitum. Ergo, the universe is infinite.

Ginger put down her Simburger. "Kiss me, Einstein."

Buzz  lifted himself across the table and closed his eyes. The kiss didn't come.

"You know, Buzz. You've got me thinking about this hallucination theory of yours."

"Namely, if we're in an hallucination, then it's possible that hallucination belongs to someone else. That's a scary thought, Buzz."

"Really scary," said Ginger taking another pull on her shake.

Curious about the stamps in our story? 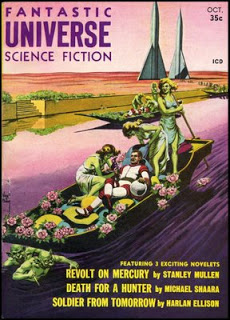