"What goes on four feet in the morning, two feet in the afternoon, and three feet at night? You have exactly 30 seconds to solve this riddle or I will explode."

"Hints? Buzz asked frantically. "Do we get hints?"

"You're joking," said the clown.

Buzz and Ginger huddled furiously together, bouncing ideas off each other like highly accelerated quarks.

"You have five seconds," said the clown.

"What did you say?" asked the clown.

A white flag appeared in the clown's hand and a second later the black box collapsed into a gooey mass, which Buzz washed down the drain.

"You solved the riddle, Buzz. You're a genius." Ginger's vermilion eyes reflected pride and admiration.

"It was the very same riddle the Sphinx posed to Oedipus." 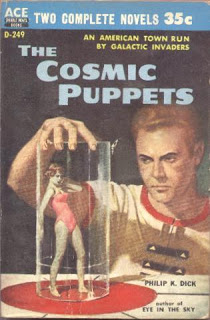